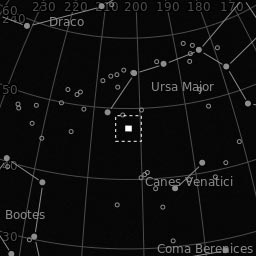 Large spiral galaxy in the constellation of Canes Venatici.

The whirlpool galaxy (also known as the whirlpool galaxy, Messier 51 or NGC 5194/5195) is a large spiral galaxy in the constellation of Canes Venatici. It is of the Hubble type Sc, i. e. with a clearly defined spiral structure. M 51 has an apparent brightness of 8.4 mag and an angular expansion of 11.2' × 6.9'.

The distance from our solar system is probably about 28 million light-years, but there are also deviating results between 15 and 37 million light-years. M 51 has a close, interactive companion. The accompanying galaxy is of irregular type and has a brightness of 9.6 mag.

An exceptionally active star formation is currently taking place in M 51, which is presumably caused by the tidal interaction with NGC 5195. That is why the galaxy has a high proportion of young and massive stars, which will only be short-lived with a few million years. In M 51 three supernovae were observed within 17 years: SN 1994I in April 1994, SN 2005cs in June 2005 and SN 2011dh in May/June 2011.

M 51 is also interesting because it is one of the next galaxies with an active galactic core, a type II Seyfert galaxy. In its centre there is a super-massive black hole.

As a little treat I found a tiny small asteroid in the raw images, which slowly passed M 51 within the 5 hours of the luminance shots on the right. The video can be found here: https://youtu.be/wHPw9X5bkR8