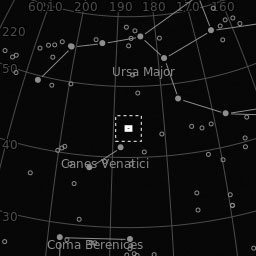 Irregular galaxy in the constellation of Canes Venatici.

NGC 4449 is an irregular galaxy of the Large Magellanic Cloud type, also called LMC type, in the constellation of Canes Venatici. It has an angular extension of 5.5' × 3.6' and an apparent brightness of 9.4 mag.

The object is about 12.5 million light years away and with a total mass of 30 billion solar masses is one of the most massive galaxies of its type. The diameter of the galaxy is about 20,000 light-years. The radio spectrum shows that the "dwarf galaxy" is embedded in a gaseous halo of almost 200,000 light years in diameter, which is a remarkable, thousand times larger volume of the visible galaxy.

Originally a barred spiral galaxy, it changed shape due to enormous gravitational forces when it penetrated, i.e. virtually collided with the neighbouring dwarf galaxy UGC 7577, which took place about 500 million years ago. This resulted in hot gas areas from which so-called starbursts emerged, regions with star-forming zones. These appear as blue and red densifications.

NGC 4449 was discovered on 27 April 1788 by the German-British astronomer William Herschel.