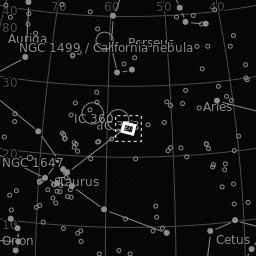 Open cluster in the constellation of Taurus.

The Seven Stars of the Pleiades where probably considered an important calendar indicator in the sky as early as the Stone Age. The rising of this open cluster of stars in the constellation of Taurus marked the beginning of spring thousands of years ago. The Pleiades are probably also depicted on the Bronze Age sky disc of Nebra.

Today we know that the Pleiades cover more than 1,000 stars, but only the seven brightest are visible to the naked eye. The seven stars have a special feature: almost all stars belong to the variable stars of the B-Class. Their brightness varies.

Observations revealed surprisingly large differences between the seven Pleiade stars: Merope, Pleione and Atlas oscillate very fast and with a relatively high amplitude. Alcyone, Electra and Taygeta pulsate a little more slowly and irregularly. Some of these differences can be explained by the properties of the stars: four of them rotate very quickly and therefore have bear rings of ejected material around their equator region. Atlas, Pleione and Taygeta are now known to be part of multiple systems.

The exposure session in my blog ...