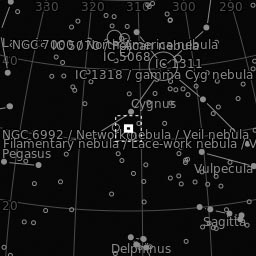 Supernova remnant in the constellation Cygnus.

NGC 6979, also known as Pickering's Triangle, is located in the northern part of the much larger Veil Nebula. The veil complex is a supernova remnant in the constellation Cygnus. The distance to the veil is somewhat uncertain. Recent studies estimate that the nebula is no more than 1,470 light years from Earth.

The picture above consists of a bright section of Pickering's triangle. This celestial object was discovered in 1904 by Williamina Fleming. It was commissioned by Edward Charles Pickering, director of the Harvard College Observatory, to examine photographic plates and catalog the stars and other celestial bodies. As was usual at the time, newly discovered objects were named after the employer and not after the assistant of the observatory who made the discovery. Williamina Fleming made many discoveries during her work for Edward Pickering. One of the most famous objects she discovered is the Horsehead Nebula.

The picture was worked out as HaOIIIRGB. Besides the narrow band data, which clearly bring out the structures, there are also many hours of RGB in the image, which give the whole the color.