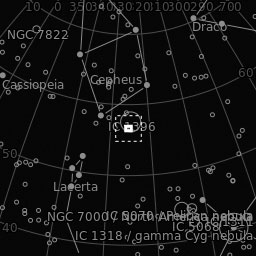 To the left above the center of the picture is the conspicuous dark cloud Barnard 163 (= LDN 1104/1106 = Dobashi 3189) with an apparently outflowing tail pointing north. The astronomer E.E. Barnard compiled numerous dark clouds in a photographic atlas in 1927 (Carnegie Institution, Washington).

B 163 is very dense, so that only very few stars shine through it. The compact small dark cloud southwest of B 163 in the center is Barnard 163SW. It also shows a tail to the north. Both belong to the few dark clouds with a rotation. This and the fact that both dark clouds are clearly cometaric has led to many discussions in the professional world. One of the dynamic models states that the material from B 163 and B 163SW flows backwards along the tail. This could mean that both clouds come from the direction of the centre of IC 1396 and fly away to the southeast. Thus it becomes plausible that the tail is created by the impact pressure of the dark clouds during the collision with the gas of IC 1396 itself. Looking at the southeast front of the dark clouds on our AdW, such a collision front is indeed highly probable. In addition, as the image section from AladinLite shows, the tail direction is very well compatible with the direction to HD 206267 in the center of IC 1396 (click here).
About 20´ south of B 163 SW you can see another dark cloud, larger and curved. This is B 162. Also for them you can see a relatively sharp impact front to the southeast, in addition also a tail formation. Just to the right of the center of the image there is an elongated globe with a bright rim, this is the cometary globe [G85] 12, named after A.L. Gyulbudaghian (1985). It also bears the catalogue name SFO 37 = GN 21.38.9. This object is clearly comparable with the central elephant trunk IC 1396 A/B - only much smaller. The northern brightest edge area is obviously excited to emission by HD 206267. In 1991 the Japanese Sugitani, Fukui and Ogura examined this globe and found an embedded IR point source. A newly formed star might be hidden here.
Text to the object and the recording data: Peter Riepe